Drug testing is typically performed to determine whether someone has been using illicit or prescription drugs. According to the National Library of Medicine (NLM), the main purpose of drug testing is to look for signs of drug misuse.

4.5(916 reviews)
This clinic has shorter than average waiting periods
•

What is a drug test?

A drug test can be performed using a sample of your urine, blood, saliva, hair, or sweat, adds the NLM. These tests can be done in nearly any healthcare setting, including urgent care centers, walk-in clinics, stand-alone clinical labs, and hospitals. If you need a drug test, Solv can narrow your options to only the highest-rated providers in your area so you can make an appointment right away.

Who should get a drug test?

Drug testing may also be needed if you are receiving treatment in a drug or alcohol recovery program, being investigated in a court case, if you had an accident and were injured at work, or if your doctor wants to make sure you are using certain prescription drugs correctly, says the NLM. Examples of prescription drug misuse include using drugs that were prescribed for someone else or using drugs like opioids for the sake of getting high.

Drug testing can usually be performed at random without any advanced notice or can be scheduled ahead of time. According to the Substance Abuse and Mental Health Services Administration, random drug testing is typically only done when illicit drug use is suspected. These tests can screen for the presence of a wide range of drugs, including alcohol, cocaine, methamphetamine, and heroin. They can also screen for misuse of prescription drugs including benzodiazepines and opiates.

The NLM says most drug tests are performed as urine tests. They can often identify the type of drug(s) you were using, the amount that was used, and the length of time you were using drugs before taking the drug test. Drug testing may also help determine how your body reacts to a particular drug, adds the NLM.

How to get a drug test

Drug testing is available in a variety of healthcare settings. You do not usually need a referral from a doctor to get a drug test. However, if you have health insurance, you may want to consider asking your doctor for a referral to a drug testing provider that is included in your healthcare network or that is covered by your insurance plan.

According to the NLM, you can even do a home drug test. These tests come in kits that include all the supplies you need to do the test and send your sample to the lab for analysis. However, it adds that if your at-home drug test comes back positive, you will need to have a follow-up test at a lab to confirm the accuracy of the result.

A convenient way to find out where to get a drug test is to use Solv. Solv features a directory of all top-rated drug test providers in your area so you can browse providers and choose one that accepts walk-ins or allows you to book a same-day or next-day appointment.

What are the different types of drug tests?

Drug testing can be performed using a sample of your urine, blood, saliva, sweat, hair, and even your breath, reports the NLM.

Urine tests are best for detecting alcohol, cocaine, marijuana, amphetamines, benzodiazepines, and opioids, adds the NLM. These tests have a detection window of hours to days. Urine tests can only detect the presence of substances after at least two hours have passed since you last used drugs.

Blood testing is usually only performed in emergencies to detect the presence of alcohol in the bloodstream, reports the NLM. Breath testing is also typically performed to detect only alcohol, though it may also be used to detect cocaine, marijuana, benzodiazepines, amphetamines, and opioids.

Sweat testing and hair testing give a detection window of hours to weeks according to the NLM. Sweat testing requires you to wear an absorbent pad for several hours, and hair testing involves removing hair from your scalp or another region of your body. Hair testing can be used to detect substances, including cocaine, phencyclidine (PCP), amphetamines, opioids, and MDMA.

What happens during a drug test

The most commonly used drug tests require you to provide a urine sample, reports the NLM. At the lab or testing site, you will be given a small sterile cup into which you will urinate to provide a small sample. In some instances, a healthcare professional may need to be with you in the room while you take the urine test to make sure your sample isn’t contaminated or tampered with.

During a blood drug test, a healthcare professional will use a small, thin needle to draw a small sample of blood from your vein. Your blood is collected into a vial or test tube and is taken to the lab for analysis. The NLM says you may feel a slight sting when the needle goes in and out. A blood drug test usually takes less than five minutes.

If you are getting a drug test that requires a sample of your sweat, hair, or saliva, the drug testing provider can talk to you in greater detail about what to expect during your appointment.

How to prepare for a drug test

Drug testing requires little to no preparation, as the purpose of testing is to check for the presence of drugs and alcohol in your system.

The NLM suggests telling your test provider about any prescription medications, over-the-counter medicines, and nutritional supplements you are taking, given how these substances may affect your test results. It also recommends avoiding foods that contain poppy seeds—since opiates are derived from poppy seeds, you may end up testing positive for these drugs. Muffins and crackers are examples of foods that may contain poppy seeds.

Find Drug Testing near you 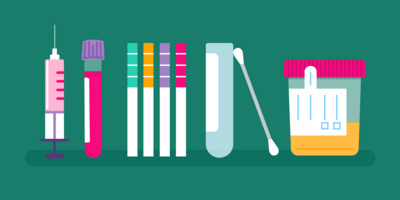 If you're curious about drug testing, sometimes it can be hard to know where to look to get comprehensive,...