Influenza (commonly known as the flu), is a respiratory virus that tends to peak during the winter months. Because the symptoms of the flu can mimic other viral infections like COVID-19, it is important to get tested. Understanding when and how to get tested for the flu will help you get the right treatments, so you can get back to feeling your best!

4.85(447 reviews)
This clinic is rated highly in patient reviews and ratings
•

4.76(635 reviews)
This clinic is rated highly in patient reviews and ratings
•

There are a few different types of tests used to detect influenza viruses.

The most commonly used tests, according to the CDC, are called rapid influenza diagnostic tests (RIDTs). An RIDT is an antigen test that detects if there is a portion of the flu virus in the body. RIDTs are rapid test, usually giving results in about 10-15 minutes. Unfortunately, the CDC notes that because of the speed and type of these tests, RIDTs do not provide the highest accuracy. So even if you test negative, there is still a small chance that you could be ill with the flu.

Another type of flu test is called a rapid molecular assay. These tests look to see if any genetic material of the flu virus is present in the body. These are also fairly quick tests, usually yielding results within 15-20 minutes. However, the CDC notes that assay tests are a bit more accurate than the RIDTs.

Other types of flu tests

Additional types of flu tests include reverse transcription polymerase chain reaction (RT-PCR) tests, viral culture tests, and immunofluorescence assays. The RT-PCR tests are nucleic acid amplification tests, meaning that they look for the presence of nucleic acids in the body and are highly sensitive, making them the most accurate testing option. RT-PCR tests usually take about 15-30 minutes to give results. Assay-based tests are typically used to help distinguish between different variants of the flu (like influenza A and influenza B).

Who should get a flu test?

Anyone who is showing symptoms after being exposed to the flu, should get tested for it. Many times though, you will have no knowledge of any exposure. So it is best to get tested if you show any of the common flu symptoms during “flu season” (which is October to April for the United States). According to the CDC, common symptoms of the flu include:

It is worth noting that many people don’t ever get tested for the flu, because they are able to manage symptoms by resting at home, reports the CDC. So it is safe to assume that anyone experiencing these symptoms during flu season is capable of exposing others to the flu virus. If you are at a higher risk of complications that could be exacerbated by catching the flu, a healthcare practitioner may recommend more diligent screenings, tests, and precautions. People at a greater risk of complications from the flu, according to the CDC include:

Because the flu is a respiratory virus, the CDC warns there is a risk of developing severe complications from the flu. Pneumonia is an infection of the lungs that can have serious health repercussions if not properly diagnosed and/or treated. It is common in severe flu cases if treatment is delayed. For this reason, taking steps to protect yourself (like getting your annual flu shot) and getting tested if you have symptoms is recommended.

How to get a flu test

Flu tests are widely available throughout the country; however, access varies depending on location. Ultimately, if you are interested in getting a flu test completed, you should start by reaching out to a healthcare provider who can point you in the right direction. Alternatively, many local pharmacies offer flu tests via walk-in appointments, so finding out which pharmacies in your area offer testing is also an option.

At-home flu tests are also available, and instructions are included in these tests for how to perform them. There are two types of at-home tests available: rapid and self-collection. Rapid tests require you to swab your nose to collect a sample of mucus that is then mixed with a solution and placed on a testing stick. Self-collection tests require a mucus sample be sent to a lab for testing. While the self-collection tests usually will require a longer wait time to obtain results, they are often a more accurate option than the rapid tests, notes theCDC

Flu tests are usually not covered by insurance. However, the cost of most tests averages around $20 per test. This rate will vary slightly, depending on your location, so check with your local pharmacy and/or healthcare provider about the cost of testing in your area.

What to expect during a flu test

If you haven’t undergone the experience of getting a flu test, it is helpful to know what to expect ahead of time. First, understand that you don’t need to prepare yourself in any way before going for or taking a test.

During the test, a sample of your nasal secretions is needed. This sample can be collected in a few different ways, and is almost always collected through the nasal cavity. The most common sample collection technique involves using a nasal swab, notes the CDC. The depth of inserting the swab varies depending on the type of test and age of the patient.

The CDC notes that many people report feeling a gag and/or a tickling sensation during a flu test because of the sensitivity of the nasal cavity. These sensations are usually brief and resolve once the sample collection is over.

While most people recover just fine from the flu, the CDC recommends that you still take precautions to avoid getting other people sick.

According to the CDC, if you test positive after getting a flu test, you should follow their guidelines for self-isolating yourself until you recover.

Current CDC guidelines recommend that if you test positive for the flu you:

Remember, your healthcare practitioner can prescribe medications to treat the flu. Several antiviral drugs are approved to fight against the flu virus. These are not sold over the counter, and they require a physician's prescription.

Antiviral drugs work best when started soon after flu infection begins, notes the CDC, so it is best to seek testing and treatment soon after you begin experiencing symptoms. These medications are also helpful as they may reduce the risk of more serious complications from the flu, especially for those who are high-risk. In addition to lessening the severity and duration of some symptoms, these medications may also prevent the need for a hospital stay. Because there are several options on the market, consult your doctor so that you are taking the appropriate medication and dose for your specific needs.

Find Flu Testing near you 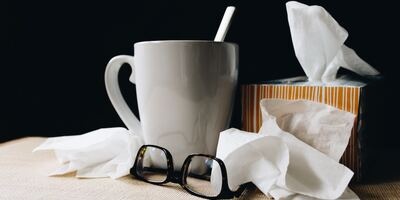 6 Ways to Kill a Cold Before it Starts

Perhaps the most annoying thing about the common cold is right there in its name: it's common. Once, twice, or...